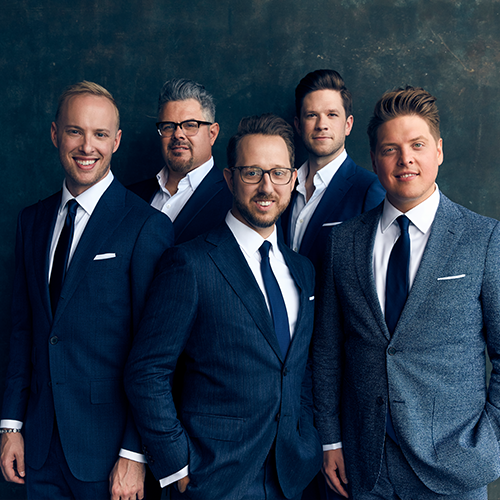 Watch
“Great is Thy Faithfulness” Video

In a powerful crescendo of accomplishment over the past several years, contemporary classical vocal group Veritas found themselves in some tremendous places, from belting out their signature power harmonies on the Carnegie Hall stage to crooning cruisers in the middle of the Caribbean, to joining Sandi Patty on her Forever Grateful tour.

They also found themselves interacting with thousands of fans after shows and online, hearing their stories, their challenges, and most of all, their hopes.

This, in turn, energized Veritas’ purpose. With their sophomore record, Hope Survives, the men of Veritas-Jeff Anderson, James Berrian, Andrew Goodwin, Jordan Johnson and Lucas Scott Lawrence-are wielding their powerful, dramatic musical arsenal to communicate the hope expressed by their fans, as well as the hope which guides each of their lives.

“We get so many messages from people on social media, and lots of emails telling us how they were going through a horrible time, and our music reminded them of God’s love for them,” Lawrence said. “It gave them hope.”

The power of hope is also something very real and personal to each member of Veritas.

“Each of us brings a unique voice and sound to the group,” Anderson said. “We also bring five different stories-which are still being written.”

For his part, Anderson said he had lost hope in 2007, when he lost his father to a “horrific and painful battle with brain cancer,” and at the same time, lost his voice for 8 months-an ailment that required reconstructive surgery and therapy to learn how to speak all over again.

“I couldn’t whisper, speak or even fathom singing again,” he said. “To me all was lost and I really struggled to find anything positive in life, but during this dark time, I was taught a valuable lesson. I realized, for the first time, I had been placing too much trust in man, material things and my own gifting. It wasn’t until I lost it all that I realized my worth was not found in my talent or the things of man but in Jesus Christ alone. Once I placed my Creator on his rightful throne, my hope was restored. He gave me the power to survive. Hope survives!”

At a young age, Johnson also lost his father, and said in the midst of such loss, “the one thing I had to hope in was Jesus.” Similarly, Goodwin has dealt with the ongoing pain of his father abandoning

the family when he was very young, embracing hope for the future from his Heavenly Father’s love-something that has become all the more important now that he himself has children.

One of Hope Survives’ upbeat ballads, “Unforgettable”-co-written by The City Harmonic’s Elias Dummer-sharply resonates with Berrian’s story: “Do you feel like just one in a million / Just a drop of water in the sea / Do you feel like you were made to matter / While it seems the world around you disagrees / Even if the sky is falling all around / Heaven knows that you’ll survive the fall / You’re one in a million stars that light up the night / You’re unforgettable.”

As the only unmarried member of the group, he says that while he can sometimes relate to feelings of emptiness or uncertainty, God fills him with hope that He has a good plan for his life.

“For me, it is waking up every day and wondering what my life is going to look like in five, ten years, but I do not have to worry about that,” he said. “God is going to be with me.”

For Lawrence, hope has emerged in the midst of a heartbreaking journey of infertility he and his wife have experienced.

“I got to the point where I had to choose to trust God’s goodness, to choose the peace I get when my mind is stayed on him,” he said. “It was a choice I had to make every day.”

He said the Ronnie Freeman-penned song, “Come To The River”-which he describes as “a breath” on the album-has meant a lot to him, as it is an invitation to rest in the river of peace that Christ offers, especially when it is much easier to dwell on life’s stresses and unknowns. Lawrence and his wife are now resting in that peace as they prepare to meet the child they are going to adopt.

“Even though we are on stage looking as if we have it all together, stuff is going on in our lives, too,” Goodwin said. “The five of us on stage represent everybody that we’re singing to. The biggest thing for us is we want people to know there is hope. Whatever you are struggling with, we want to tell you why there is a hope that will survive through that particular struggle.”

Once again pulling from a deep, diverse pool of songs and genres, the 10 tracks of Hope Survives
speak to the hardships of the human experience by declaring the ultimate victory Jesus brings.

Songs from two iconic artists serve as the foundation for the hope that is proclaimed throughout the album, with Veritas’ rich cover of Sandi Patty’s “Via Dolorosa” and their soothing rendition of Bob Dylan’s “To Make You Feel My Love” painting a vivid picture of Jesus’ love for the world.

An a cappella treatment of “Great Is Thy Faithfulness” and an orchestral arrangement of “Amazing Grace” give fresh musical paint to time-honored hymns, while “Bring Him Home” from the hit musical Les Miserables declares trust in God in the midst of suffocating uncertainty.

In some cases, finding the perfect song meant, for the first time, writing it themselves.

Veritas’ Johnson and Berrian wrote the triumphant title track (along with producer Benjamin Backus of for KING & COUNTRY, and Ross King), opening the record with the victorious lyrics: “Hope survives / When it seems that life is over in the darkest night / But it comes back even stronger / In the wounds and scars we find out who we are / Through the fight we will find hope survives.”

“More Than Conquerors,” written by Berrian and the album’s producer, Jay Rouse, invokes Romans 8 with operatic flair and passion.

Artists Todd Smith (of Selah) and Tyrus Morgan penned “Let Us Be Light” with Jay Speight and Veritas’ Anderson. Another high-powered, uptempo pop-flavored track, the song sends an invitation to believers: “Let us be light, let our love shine / Break through the shadows, piercing the night / Let us be light, don’t hold it inside / Let the world know hope is coming alive.”

Since coming together in 2012, Veritas has always focused on crafting a dramatic experience to tell the greatest story ever told-the diving drama of love between the Creator and His Creation. Now, they are doing it in a way that more intentionally seeks to speak to their audience.

It is something they picked up from Sandi Patty while on tour with her.

“She’d say every night, ‘I know I’ve been called by God, but it’s you, the audience, I’ve worked for all these years,'” Berrian recalled. “That really resonated with us. We asked ourselves how we can best minister to our audience, to speak to the heart and bring encouragement to them, and we really honed in on the common thread we all share, hope.”

“Once you show people who you are and you are transparent with them, all of the sudden they come out of the woodwork saying, ‘That is my story, too.'” Goodwin said.

“The truth is, the five of us on stage represent everybody who we’re singing to, every night.” That’s humbling, they say, but it’s motivating, too. And it has changed them.
Whereas Veritas’ debut album introduced the quintet to the world as a musical force, the group’s follow-up uses that musical force to send a message.

“The first record was our sound,” Lawrence said. “This one is our heart.”